The house I grew up in has apparently been sold, with closing pending. Once upon a time I thought that this would be a big deal. I’m finding that I don’t really care that much. Being a college student who now moves approximately every 12 months, I’ve gotten used to residences as temporary places to keep my food, bed, and computer.

That said, I’m still a little sad to see it go. I haven’t been there in years. I think probably four or five years actually. Something tells me that if I were there visiting while thinking about it, I might get a bit more misty.

It wasn’t a great house, really. Now that I’ve lived in some nicer places, I can see that the ceilings were somewhat low (though not compared to my old basement apartment), the baseboards plain, and the floor plan uninspiring. My parents put a fair bit of money into it, though, replacing the (cheap) original light fixtures, ripping up the linoleum and laying down good tile, and after we mostly moved out, putting in brand new carpet. It was a fine place to grow up, in a decent neighborhood.

I rifled through my 2,501 iPhoto pictures and realized that not one of them is from that house. I didn’t have a digital camera until I moved to Louisiana, which explains this. I have paper photos, but those aren’t with me and they aren’t easily posted at this moment.

In other news, in case you ever wondered what I looked like with long hair and a goatee, wonder no more. 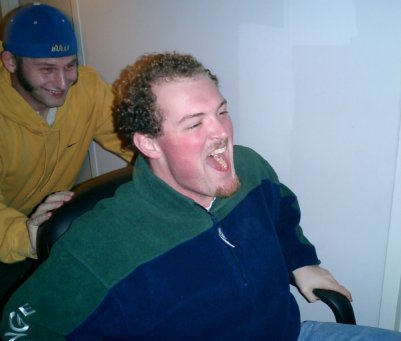 That’s from a bout of Office Chair Jousting in the hallway of the Delt House my senior year. I’m being pushed by the magnificent Aaron (Polish last name).