I’m going camping in the San Juan Islands north of Seattle until July 6th, so I’ll be out of contact until then. Just FYI.

Does everyone know what … time it is? 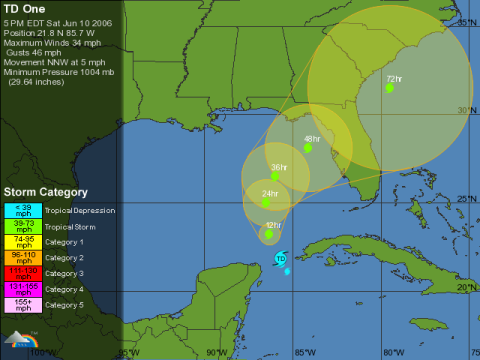 Yep! Tropical Depression One is here. I used to find this sort of thing exciting. I was very surprised to find myself physically nauseated when I saw the projection map and the little hurricane symbol in the Gulf of Mexico. I guess Katrina had a deep effect on me. If I weren’t so busy I’d celebrate by drinking… heavily.

I’m in a bit of a pickle with a paper I’ve been writing for a while, and this post (which I had bookmarked because I thought it would have good writing tips — and it did, but not the kind I wanted) gave me a little bit of comic relief.

Actually, a lot of comic relief. If you’ve ever done research, applied for a grant, or tried to write a scientific paper, I’m 90+/-5% sure that you’ll get a kick out of this guy’s writeup.  I give an except below to give you some idea about how it reads:

3. Scientific Writing
You have spent years on a project and have finally discovered that you cannot solve the problem you set out to solve. Nonetheless, you have a responsibility to present your research to the scientific community (Schulman et al. 1993d). Be aware that negative results can be just as important as positive results, and also that if you don’t publish enough you will never be able to stay in science. While writing a scientific paper, the most important thing to remember is that the word “which” should almost never be used. Be sure to spend at least 50% of your time (i.e. 12 hours a day) typesetting the paper so that all the tables look nice (Schulman & Bregman 1992).

A little while ago I made a note to myself to look up the effects of atrial natriuretic peptide. We’re having an air conditioning / server issue so I took care of this while waiting. Wikipedia, as usual, had the answer: